Climbing involves a trusting partnership, and your belayshionship shouldn’t end at the crag or the gym. When you take your belay device (yes, we were referring to that the whole time) out of your bag, you should understand all the safety features and best practices for the best time at the crag.

The tried and trusted Petzl Grigri has been the clear class leader since its inception in 1991, with few variations or design updates needed in the last 30+ years. At the risk of spoiling the surprise, we consider the Grigri to be the best choice if you’re only going to have one belay device in your collection.

Many brands offer their own versions of belay devices, using the same principles as the Grigri, namely a locking mechanism, fool-proofing system, and sleek ergonomics, and while there are plenty of great choices that offer specific advantages, none have topped the easy handling and failsafe operation of the original.

The comparatively new Wild Country Revo came onto the scene in 2018, offering many of the same features, along with advantages that some climbers prefer. Although the Revo has a few kinks that can catch lead belayers (in the metaphorical sense), it’s earned its place as a popular choice, especially when top roping is on the agenda. The big advantage is that since it’s a bi-directional locking device, it can be set up to load the rope from either side, giving you the option of left-handed belaying, which the Grigri doesn’t accommodate. 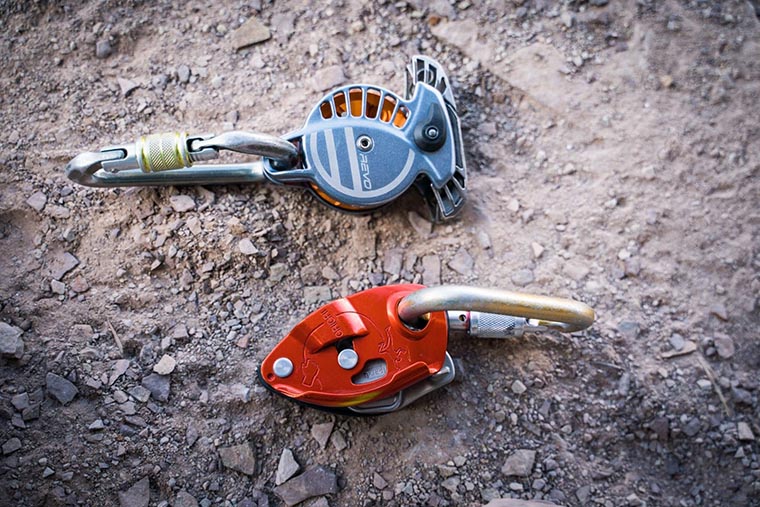 While buttons and new technology can be cool and fun, simplicity is an asset when your partner is on the wall. The Grigri has a single release lever, and simply opens and closes like a clam shell to load the rope. There’s very little else you have to do, and nothing further you need to monitor while either paying out slack or taking. By contrast, the Revo has two locking switches on either side to disengage the auto-lock, and a latch to open the device. It’s slightly more gears and switches, even if it’s still very user friendly. 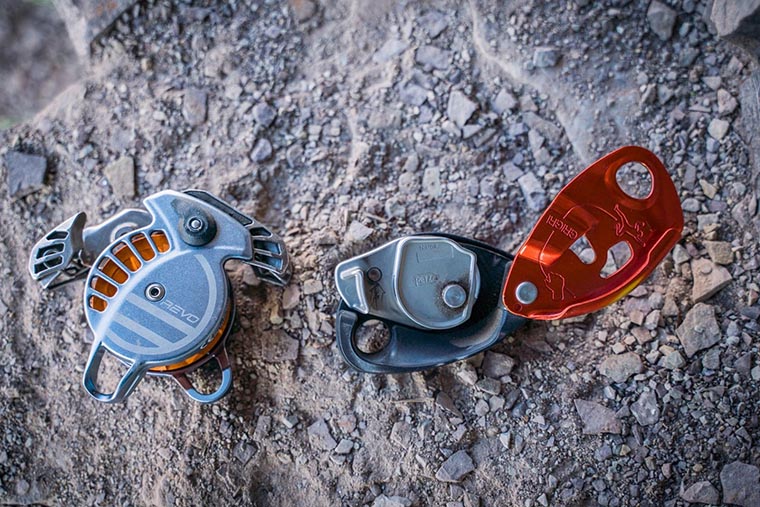 Petzl explicitly states that a Grigri is an “assisted-braking” belay device and not “auto-locking,” requiring the belayer to position the brake strand in the correct direction for the device to lock. There’s also the option to override the brake, by pushing down on the climbers’ rope side, which is how lead belayers quickly feed out slack. This can put a belayer in the vulnerable position during an unexpected climber fall, allowing rope to feed up to them, and thus, out of the device. But the reason this rarely happens is a belayer is typically not disengaging the brake the entire route, and is only pressing down to release slack as needed.

The Revo, on the other hand, is considered a bi-directional auto-locking device, and has a panic-proof locking mechanism. In other words, while the Grigri can only lock with the rope traveling in one direction, the Revo can lock in both directions, giving you more setup options, including left-handed belaying. The Revo locks by means of a calibrated acceleration in the internal wheel as the rope spins it. This requires some rope to feed through the device before it locks, so the wheel can get up to speed. This locking mechanism can work great if you’re worried about unexpected falls, especially in spots where it’s hard for the belayer to see the climber.

A downside of this type of locking mechanism is that depending on where the belayer’s hands are, rope sliding through the device can lead to pinched fingers, and worse, to longer lead falls. Additionally, the belayer needs to be deliberate in managing slack, because feeding or taking too quickly can engage the locking mechanism, requiring the belayer to manually override the brake before the climber can proceed. 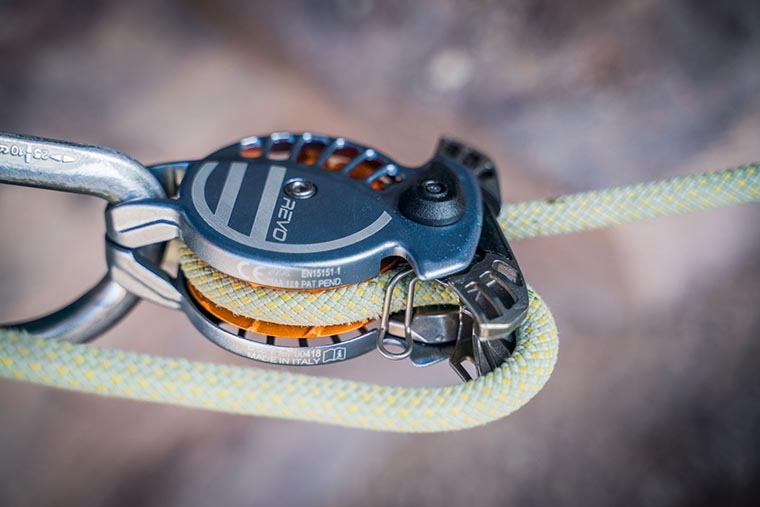 As a result, we’d advise beginners to avoid the Revo. However, for more experienced belayers who want the extra setup options, the Revo could be a perfect match.

Taking the Revo outside, you’d most likely also want the ability to belay from the top. The setup, similar to the Grigri, would need to be a single-rope belay, and while Wild Country doesn’t divulge too many details about its multi-pitch potential, it does mention the need to maintain an active belay while using the device in order to avoid giving slack by accident. In contrast, the Grigri’s ability to payout slack easily using the release lever, and the fact that a climber's weight on the rope will lock the camming device instead of unlocking it, makes the Grigri the better and less-stressful option for multi-pitch days.

The Revo can be used for rappelling on a single rope, but be aware that if your speedy descent clocks in at, or faster than 4m/s, the device will lock. The weight of a hanging rope can cause it to unlock, which can create a situation where it can be hard to stop, or stay stationary if you want to pause to clean a route. With the Grigri, the release lever is the only way the device will allow you to descend down the rope, and by simply letting go of the lever, the device locks the rope and you can stop mid-descent without worry of the rope continuing to slide through (that is, if you’re using the correct diameter of rope and a correctly functioning Grigri). You control when the device grabs the rope, and the weight of the rope on the brake side sometimes makes your descent slower by twisting the device into the camming position. The Grigri easily takes the cake when it comes to rappelling, with its added control and simpler use.

The Revo is slightly larger than the Grigri, and the two locking fins on either side make for slightly more snags in your backpack. And for those who weigh all your items before embarking on an alpine or big wall quest, the Revo weighs in at 283 grams, while the Grigri 2, in comparison, weighs 170 grams. If throwing a belay device in your pack goes without thought, the difference is negligible, but for those looking for a lighter load, the Grigri wins again.

One might argue that it’s unfair to compare a trusty Grigri to technology that hasn’t had as long to work out the squiggles, but that’s not entirely accurate. Simply put, the Grigri is such an easy and safe device to use, even for inexperienced belayers, and it’s so incredibly versatile, that it’s the clear winner if you want one belay device to cover all of your bases.

But if you already own a Grigri and want a device that’s optimized for top roping, or that accommodates a left handed belay, the Revo is a worthy option that handles similarly to tube-style devices, and has features that can keep a climber from decking. The big tradeoff is that it demands a bit more from the belayer, as the locking mechanism is fairly sensitive, and can take longer to catch a fall if the belayer isn’t deliberate in their rope management. We consider it to be a niche alternative to the Grigri’s universal appeal, but when used appropriately, it’s a solid addition to any climber’s well stocked gear rack. 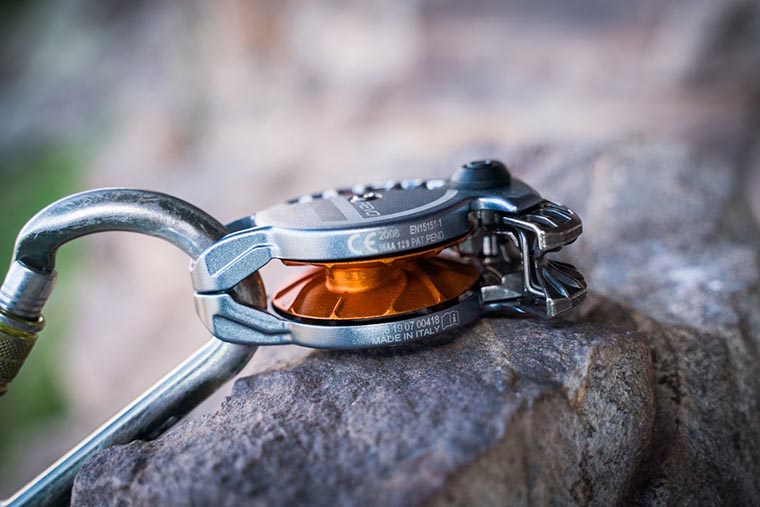