Words can barely describe the desert wonderland that awaits in southwest Utah's Bryce Canyon National Park. The park is known for breathtaking amphitheaters filled with spectacular labyrinths of red, orange, and white hoodoos standing in defiance against the erosive forces of nature. Hoodoos are tall, thin pinnacles of rock that arise from the desert floor, formed when soft rock is capped by harder, less easily eroded stone that protects it from the elements. Bryce has the largest concentration of these magical spires in the world.

The area was named after a Mormon pioneer named Ebenezer Bryce who attempted to grow crops and graze cattle. He abandoned the area in 1880. During the following years, conservationists lobbied for governmental protection, and in 1923, President Warren G. Harding named the area a national monument. Four years later, after the some state land was sold to the federal government, Bryce Canyon National Park was established, covering 35,835 acres. 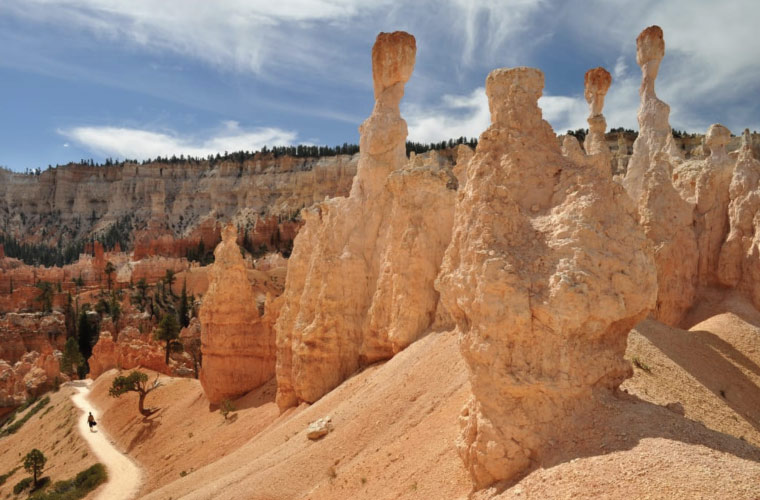 A sampling of the famous hoodoos in Bryce Canyon.

Most visitors to Bryce just stick to the 18-mile scenic drive, sightseeing from the 13 viewpoints over the amphitheaters. However, there are 50 miles of trails to enjoy, including eight marked and maintained hiking trails that can be hiked in less than a day. For quick, easy hikes, look to the Mossy Cave, Bristlecone Loop, and Queens Garden trails, all less than two miles long. For a longer adventure, the aptly named Rim Trail overlooks the entire Bryce Canyon amphitheater for 5.5 miles.

If solitude is the goal, the Fairyland Loop drops down into the amphitheater and treks through hoodoos, deep canyons, and past natural bridges. The highlight is the China Wall, an imposing row of ridge-top hoodoos reminiscent of the Great Wall of China. The hike is considered strenuous with 2,309 feet of elevation gain in its eight miles. Several of the above trails intersect, so visitors can combine routes into longer loops for more of a challenge. The park also has two longer trails for overnights: the 9-mile Riggs Spring Loop and the 23-mile Under-the-Rim Trail.

Amateur and pro photographers alike flock to Bryce to get a "wall hanger." A good rule is: arrive early, stay late. Some of the best shots happen before the sun comes up, and after it dips below the horizon. Popular spots also get crowded, set your tripod early. There is a Sunset Point and Sunrise Point but Sunset Point is excellent for both. Bryce Point and Inspiration Point are both perfect for huge, sweeping panoramas. Bryce Point is also great for evenings and sunsets. After shooting the rising sun, head to the 1.3-mile Navajo Loop for some mid-morning light in the amphitheater. The trail begins at Sunset Point and descends a slot canyon and steep switchbacks to a stellar view of the most famous hoodoo in Bryce Canyon, Thor’s Hammer. Nighttime is special too. The inky dark skies guarantee Milky Way shots and star trails. There is something to shoot in every season in Bryce. Spring brings wildflowers, with summer comes dramatic thunderstorms, fall has golden aspen leaves contrasting sharply against dark evergreens, and winter snow is surreal and serene. Don’t forget a graduated neutral density filter, a polarizing filter, and a sturdy tripod, it can be windy on the rim. 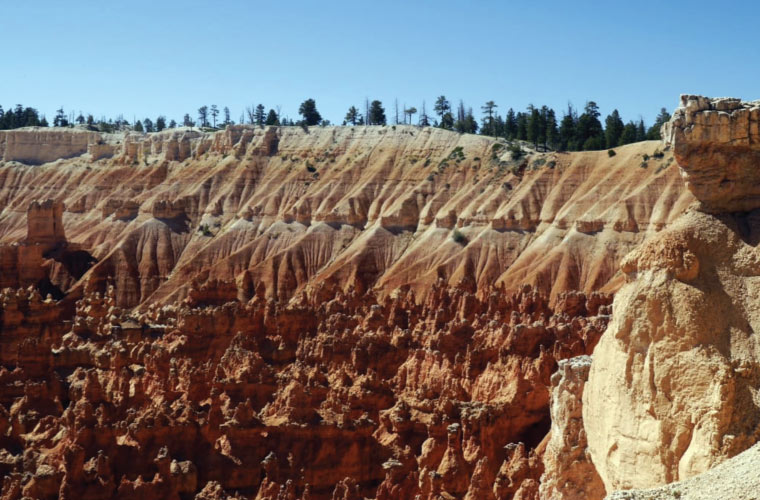 Along the rim of Bryce Canyon.

Due to its high elevation, Bryce sees a paradoxically high amount of snowfall. Snowshoeing and skiing in the desert is an unforgettable experience. More than 10 miles of marked XC-ski trails exist off of Fairyland, Paria, and Rim trails. February is an amazing time to visit, there are no crowds, cheap hotels, and a winter festival. How about a ride in a horse-drawn sleigh to the rim? Nearby Dixie National Forest has 20 miles of connecting trails as well.

The combination of clear skies, some of the best air quality in the country, and incredibly low light pollution give the area one of the darkest skies in all of North America. Stargazers can see 7,500 stars with the naked eye. In June, the Bryce Canyon Astronomy Festival attracts thousands of visitors. There's even an asteroid named after the park.

Riding a mule down into the Grand Canyon gets a lot of press, but it's crowded, expensive, and overhyped. Exploring Bryce on horseback transports visitors back to the rugged days of the wild old west, and turns city slickers into rough-and-tumble cow pokes. There are two or three-hour tours that tackle steep, narrow trails into the maze of Bryce and its geologic wonders. The sore butt is worth every second.

An easy way to gain solitude, and the best way to catch views of the park that very few see, is to hike the Under-the-Rim Trail. Descend the rim into the amphitheater, hike among the spires, pass natural bridges, and walk through valleys, canyons, dense, aromatic pine forests, and summit the park’s highest spot, the 9,115-foot Rainbow Point. On a clear day, the Black Mesas of Arizona and New Mexico can be seen 160 miles away. If hiking the entire length from Bryce Point to Rainbow Point (or vice-versa), it's 23 miles long with 7,185 feet of elevation gain, and takes about 3 days. Multiple entries and bail-out points, as well as several campsites along the route make this an easy hike to customize distance. There are two water sources that the park calls "reliable," Iron Spring and Riggs Spring, bring a filter. A $5 backcountry permit and a bear canister is required and can be acquired at the visitor's center. Also, this is a point-to-point hike, meaning two cars or a shuttle is required. In the summer, the park service has buses that run between trailheads.

How to Get the Most Out of Your Visit 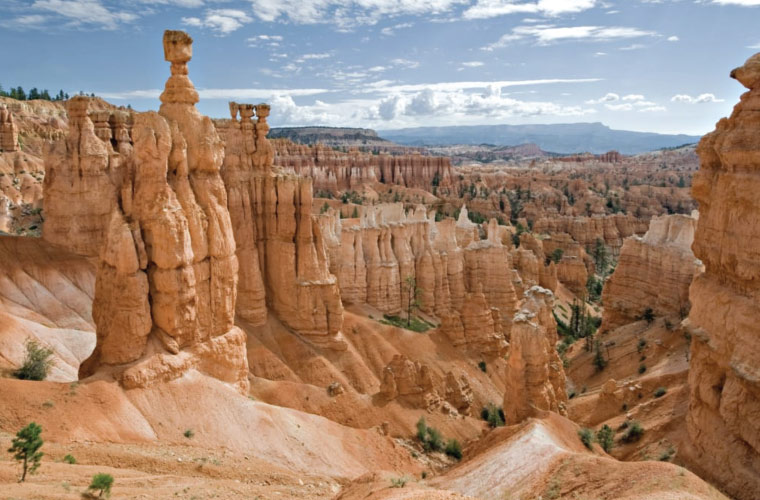 
Written by Shaine Smith for RootsRated and legally licensed through the Matcha publisher network. Please direct all licensing questions to legal@getmatcha.com.