The Everglades are genuinely one-of-a-kind. Only a few thousand years old, this singular wetland on the toe of Florida historically saw rainfall and overflow from Lake Okeechobee send a slow-moving sheet of water to Florida Bay and the Gulf of Mexico (and, to a lesser extent, the Atlantic) through vast marshes of sawgrass—the famous “river of grass”—scattered with wet prairies, open-water sloughs, and tree islands.

Once 4,000 square miles and long inhospitable to Euro-Americans (though not the Calusa, the Seminole, and the Miccossukee), the “Glades” has been clobbered by development and freshwater diversion, and ranks among North America’s most fragile and imperiled ecosystems.

Everglades National Park, established in 1947 and today both an International Biosphere Reserve and World Heritage Site, protects only a portion of the historic Everglades ecosystem, and the sheet-flow marshes that define the true Glades compose only a quarter or so of the park acreage. Also here are the internationally significant “pine rocklands” of the Miami Rock Ridge, where skinny slash pines rise from rattling saw palmettos, assorted tree islands, including cypress domes, bayheads, willow-heads, and the pockets of jungle called tropical hardwood hammocks. There are also the saline prairies, buttonwood forests, and sprawling mangrove swamps of the muggy coast. Two great Everglades drainages, the mighty Shark River Slough and the smaller Taylor Slough flowing into Florida Bay, together compose the park’s lifeblood.

Still gravely threatened by watershed impacts outside its bounds, Everglades National Park also represents a big, bristling wilderness within shouting distance of South Florida’s thronged Treasure Coast. Alligators and crocodiles cross paths here. A critically endangered puma subspecies, the Florida panther, still yowls in the backwoods. Glorious congeries of waterbirds still nest in tree islands and swamps, though latter-day plume-hunting and present-day habitat modification have taken their toll. Peer across a bromeliad-spangled cypress dome, a sawgrass ocean sailed by jungle islets, a Gulf Coast saltmarsh broken by palm hammocks and you'll realize this doesn’t feel like anyplace else in the United States—or for that matter, anywhere in the world. 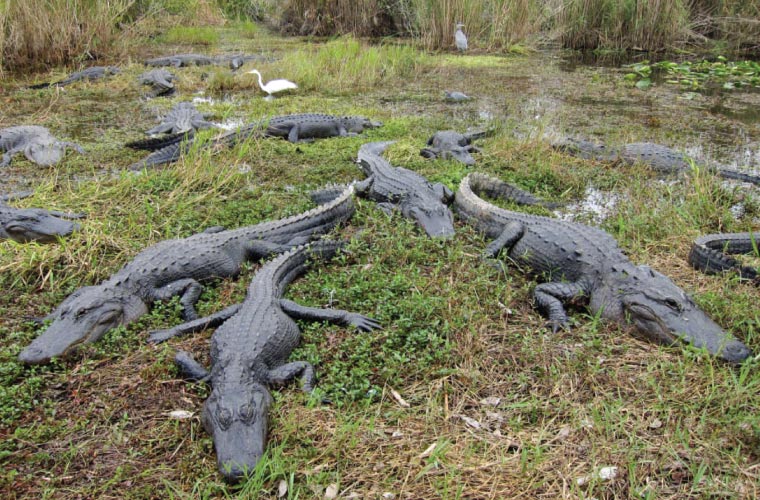 Hanging with the locals at the Everglades. Miguel Vieira

Two easy, paved, walks on opposite ends of the park offer introductions to the Glades’ extraordinary bio-diversity. Up north, conveniently situated right along the Tamiami Trail (US 41), the hike (or tram-ride) from the Shark Valley Visitor Center to an observation tower overlooking the vast, hammock-studded Shark River Slough usually turns up plenty of wildlife, especially in the dry season. Keep your eyes peeled for everything from stealthy green herons to languid gators.

To the southeast, meanwhile, the Anhinga Trail explores the marshes and willow/pond-apple swamps of the Taylor Slough, a few miles west of park headquarters. In the dry season expect heaps of alligators and passels of black vultures, herons, gallinules, ibises, cormorants, and the path’s namesake, the anhinga (or “snakebird”), a nimble underwater hunter that seems perfectly comfortable spearing fish within feet of big toothy reptiles. Peer down into the waters to spot softshell turtles and Florida gar; look to the skies to see high-flying wood storks, mass spirals of vultures, and (from late winter through summer) the astonishingly graceful swallow-tailed kite.

A stone’s throw from the Anhinga Trail, the Gumbo Limbo Trail is a contrast in styles. These two paved footpaths make a great one-two punch. The Gumbo Limbo wends through the musky recesses of Royal Palm Hammock, providing one of the park’s most accessible portals into an Everglades jungle. Wildlife’s noticeably less visible in these shadowy tangles, but the botanical extravagance more than makes up for that. Interpretive signs identify the gumbo-limbo tree itself (with its characteristic blistered bark), as well as other tropical hardwoods such as the strangler fig.

Like the Shark Valley hike, the short walk along the Pa-hay-okee boardwalk to its sweeping Shark River Slough overlook gives you a profound sense of the scale of the true Everglades.

In a place so dominated by water, paddling is naturally a premier way to experience Everglades National Park. Several marked canoe trails commence from the Main Park Road, including at Nine Mile Pond, a popular spot for ranger led paddles. In the Gulf Coast section of the park, the Turner River Canoe Trail leads from the freshwater bald-cypress strands of Big Cypress National Monument through coastal marshes and mangrove swamps to Chokoloskee Bay. At Flamingo, many canoe up the Buttonwood Canal or kayak the windy, Caribbean-flavored shallows of Florida Bay, admiring pelicans, ospreys, and bottlenose dolphins while keeping a close eye on the tides—it's easy to get stranded in the muck. 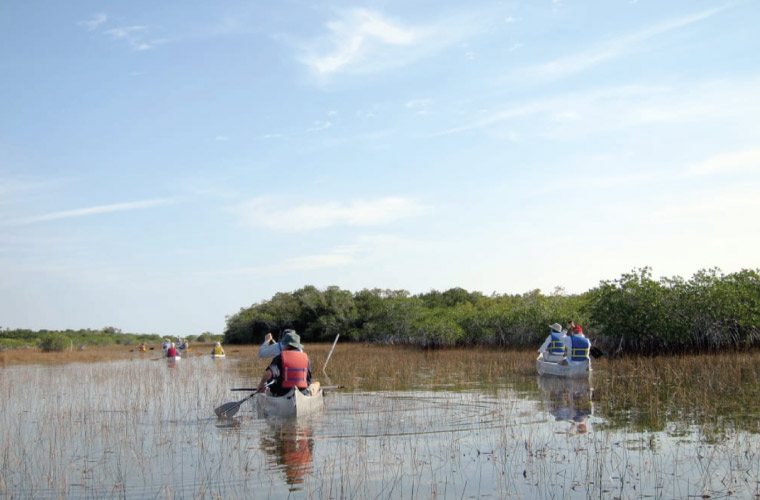 A peaceful paddle through the Everglades. Miguel Vieira

Though most of the park is utterly trail-less, there are actually miles of widely scattered footpaths that are typically quiet and uncrowded. The most extensive hiking opportunities come via the network of backwoods tracks lacing the sunny, songbird-filled, pine rocklands of Long Pine Key. Near the Long Pine Key campground lake, there’s a short hiking loop that dips into one of the jungle hammocks scattered amid the airier slash-pine woodlands.

Shark Valley and Taylor Slough aren’t the only places to seek out Glades critters. Paurotis Pond is another good hotspot, a lively wood-stork and spoonbill rookery that’s generally prowled by an alligator or two. At Flamingo, look for American crocodiles—more ashen and snaggle-toothed than gators—in the Buttonwood Canal and manatees in the harbor. A vigil on the visitor center’s bridge may yield glimpses of fishing osprey and brown pelicans, mullet-coursing dolphins, and even the odd breaching tarpon. In cypress domes and hammocks, look (and listen) for the diurnal red-shouldered hawk and the nocturnal barred owl. Dawn or dusk walks in the Long Pine Key pinewoods might—if you’re well favored by the Everglades gods, that is—produce a glimpse of a Florida panther. This area is their main hangout in the park, though they’re more common in Big Cypress. 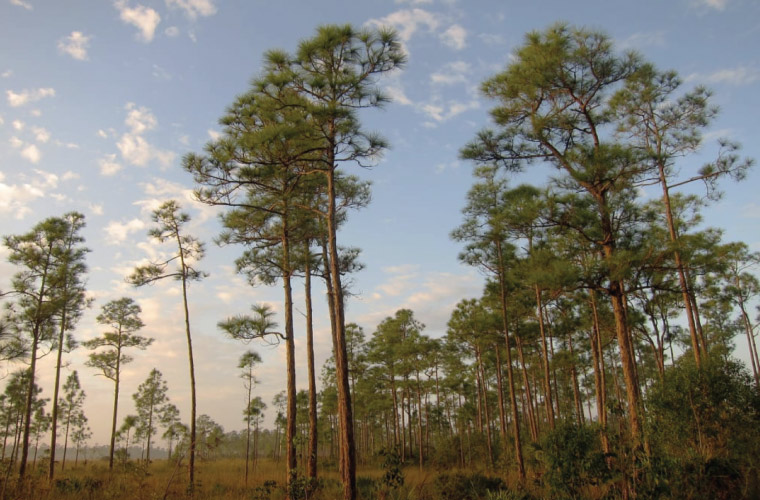 Everglades National Park is huge, and—short of a roaring alligator or psychedelic spoonbill squadron—much of its appeal isn’t of the flashy variety. Getting out in the park on foot or by boat lets you soak up its deep wildness on its own terms.

Boaters well-versed in navigation can trace the 100-some-miles of the Wilderness Waterway, which links Chokoloskee Bay in the Ten Thousand Islands with Flamingo. The liquid byway penetrates one of America’s great backcountries: Southwest Florida’s roadless mangrove coast. Wilderness Waterway campsites—some of them elevated “chickees”—are scattered along the mangal rivers and backwaters. Other paddler campsites lie along the outer Gulf shore—including the coast of Cape Sable, home to some of the wildest beaches in the U.S.—and the keys of the Ten Thousand Islands and Florida Bay.

Backpackers also find far-flung solitude in the Glades backcountry. The Old Ingraham Highway, now a footpath, has two designated campsites in the lonesome, sun-blasted sawgrass and cypress south of Long Pine Key. You can also brave mosquitoes on the hike from the Flamingo campground through buttonwood pastures to the campsite at Cape Sable’s Clubhouse Beach via the Coastal Prairie Trail.

Then there’s eschewing trails altogether and venturing cross-country. A fine way to experience this thrill for the first time is with a guided “slough slog” into one of the park’s cypress domes. Rangers lead these free foot safaris during the winter months.

Getting the Most Out of Your Trip

Written by Ethan Shaw for RootsRated and legally licensed through the Matcha publisher network. Please direct all licensing questions to legal@getmatcha.com.