2-person sleeping pads. They might be bulky to carry and a bit unruly to pack up, but if they don’t let you get a good night's sleep at camp, nothing will.

And while there are a few worthy camping pads available for two sleepers, we wanted to see how the new NEMO Roamer Double Sleeping Pad stands up to the established leader in the space, the Exped Megamat Du0 10.

As we’ll discuss, the NEMO Roamer comes out on top in many categories, including inflation time, packed size, versatility, and weight. But it still can’t quite compete with the ultra-plush design of the Exped Megamat Duo 10, which offers more cushioning and a superior R-Value. 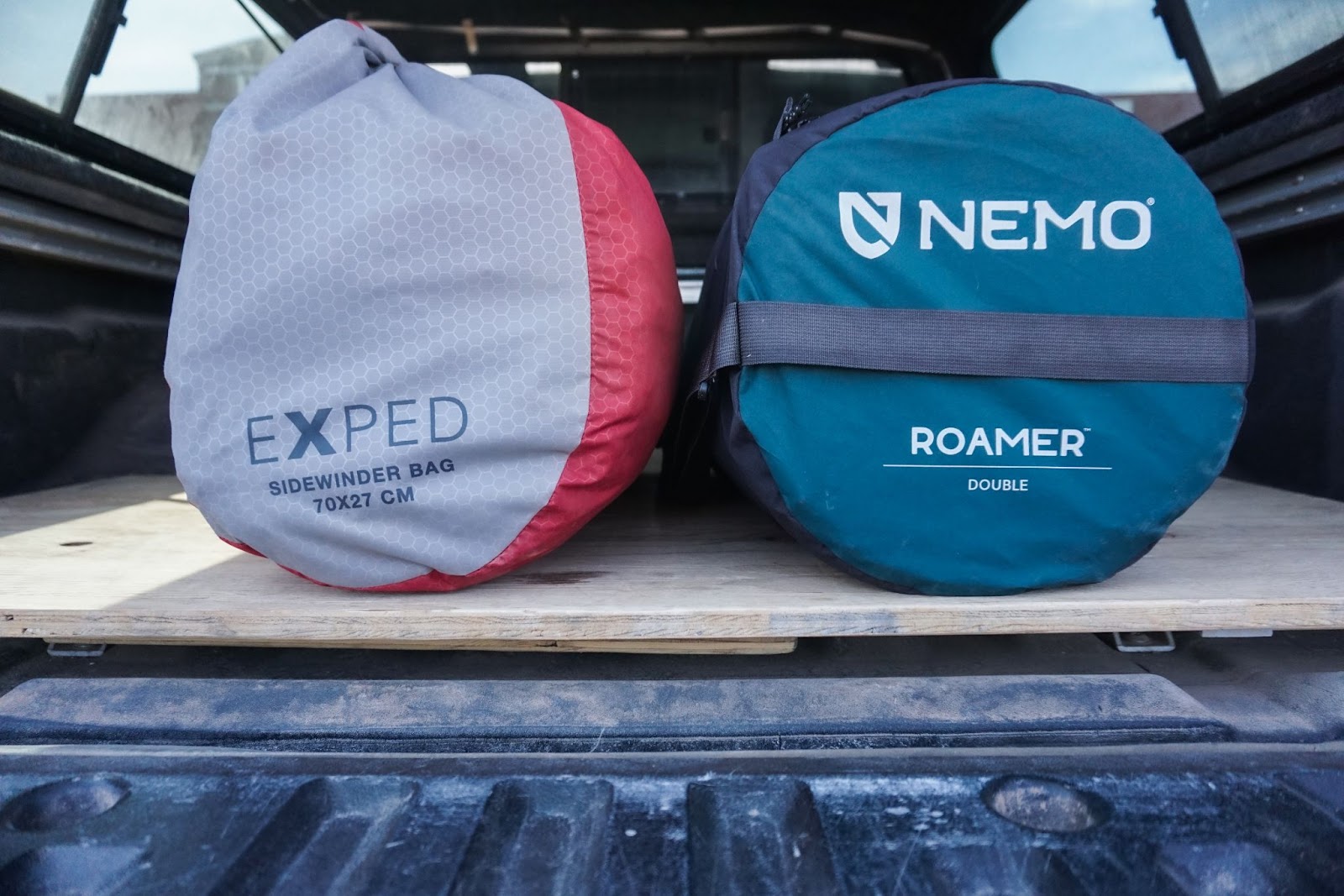 If you’re stuck between these two outstanding sleeping pads, the details below should help make your choice a little bit easier.

Compared to closed-cell foam pads or the thin, ultralight backpacking sleeping pads that many of us are used to, both the Roamer and Megamat will feel downright luxurious. And at first glance, it may seem like both are so similar that you might not notice the difference between the two at the campsite.

After all, both offer a 4-inch thick sleeping platform with an uncannily similar 78” x 52” footprint. Both are also highly insulated, adding a significant amount of warmth to your sleeping system.

But if there is still one noticeable difference between the two when it comes to comfort, and that is the ratio of air to foam.

The Roamer uses NEMO’s Flow Core™ construction, which is a fancy way of saying that NEMO hollowed out a large amount of foam inside. This creates extra space that can then be filled by air when the pad is inflated.

While this particular construction provides many benefits, like reducing weight, making it easier to pack, and helping the pad inflate faster, it also makes the Roamer more compressible. And while the Roamer is comfortable as far as inflatable pads go, some side sleepers might find themselves waking up with sore shoulders or hips. 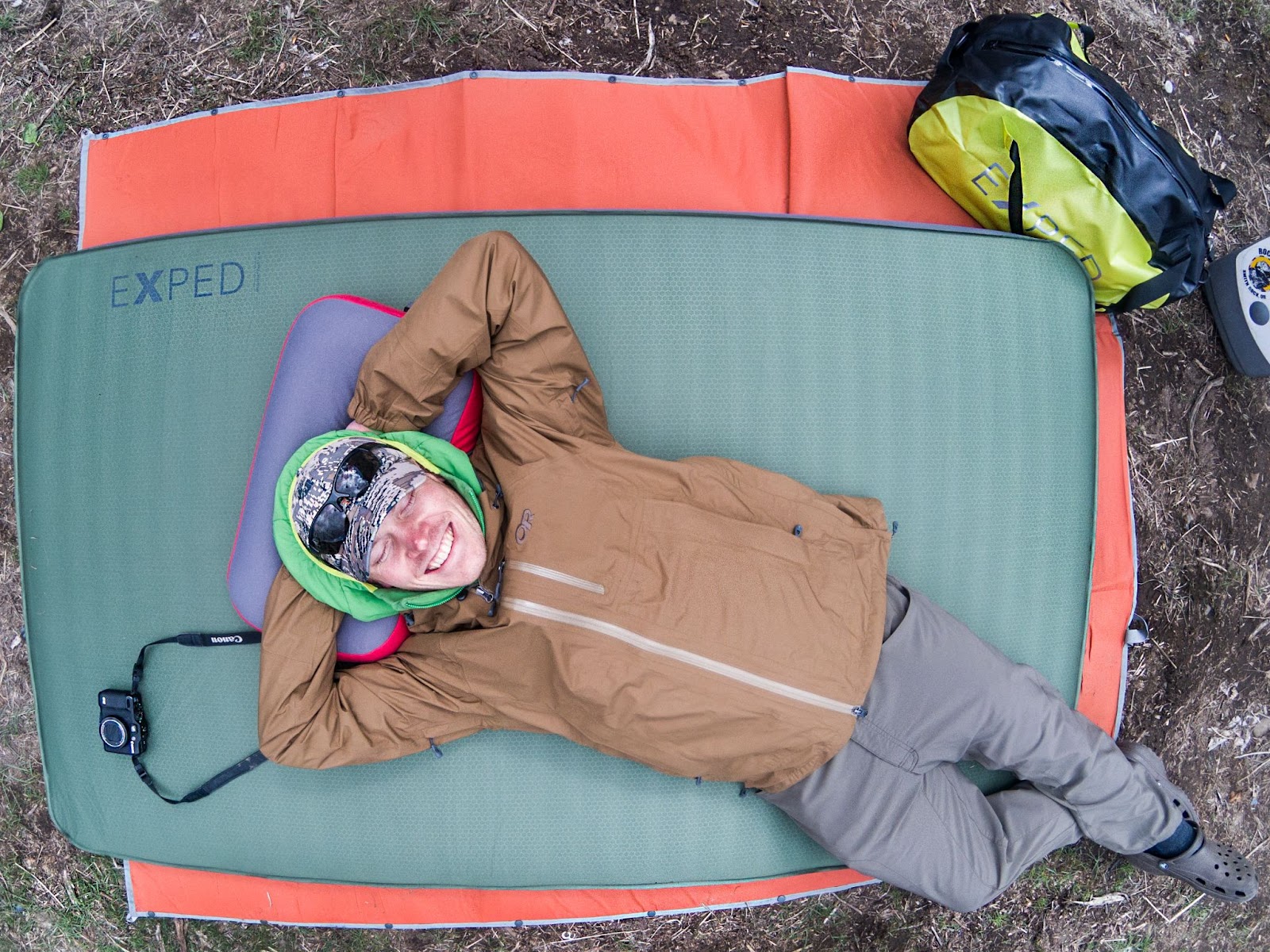 On the other hand, the Megamat sports a generous amount of foam insulation inside, meaning you get a firm mattress that puts a nearly impenetrable barrier between you and your sleeping surface. That means that whether you’re sleeping on the ground, in the back of a truck, or in a van, you won’t wake up in the middle of the night with a dead arm. 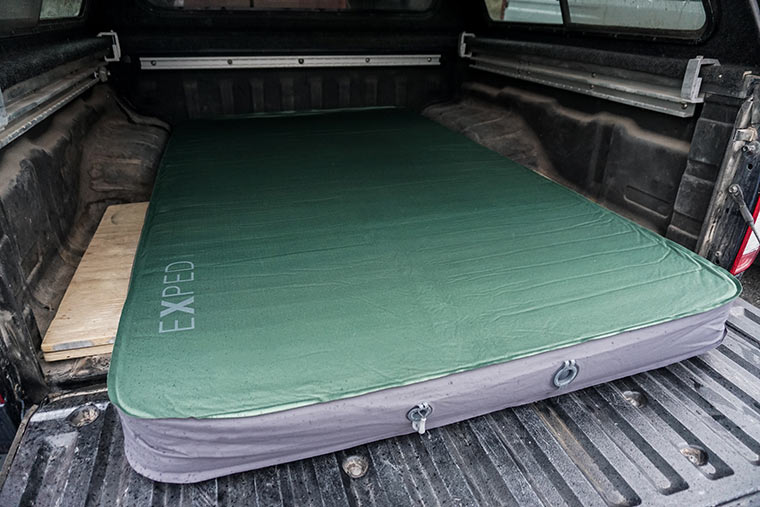 While the Megamat we tested for this article was the Long-Wide size, we’d be remiss if we didn’t acknowledge the famed Megamat Duo M, which gives the Megamat Duo the leading edge for versatility.

Some campers might be buying a doublewide pad for their tent, but many instead will be sleeping in the back of a car or van. In that case, we’d be willing to bet that you’d rather have an inflatable air mattress that fits seamlessly into the back of your car without you having to do any origami while you’re at it.

And that’s exactly what you get with the Megamat Duo M. Made to fit into mid-size truck beds, mid-size SUVs, and station wagons, the Duo M has slightly smaller dimensions, and is made to fit your vehicle while still letting two campers sleep in comfort.

The Roamer, unfortunately, only comes in an XL (1-person) and Double (2-person) option, neither of which are designed to fit snugly into the back of your Subaru Outback or short truck bed. 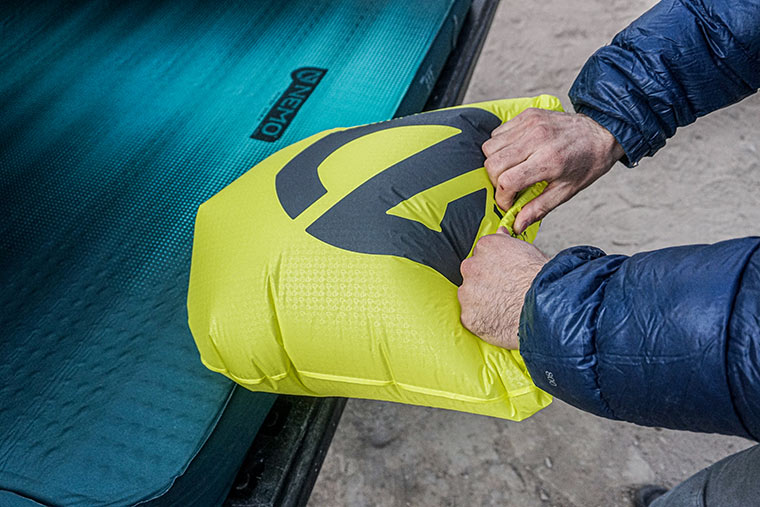 Both of these models are self-inflating sleeping pads, meaning that you can leave their air intake valves open and they will inflate to a certain point, leaving you to top them off to your taste. But not all self-inflating pads are equal in their capabilities, and with doublewide pads that require lots of air, the self-inflation process can lead to a wide range of results.

Here we find the first substantial difference between our two pads.

While the Megamat does self-inflate to a certain degree, it stops once it’s roughly 25% full, leaving you to do the rest of the work with the included foot pump. When we tested it, we let it sit for 45 minutes to make sure that it inflated as much as possible before using the foot pump. Inflating it to a comfortable level took another ten minutes with the pump.

The Roamer continued to inflate for the full 45 minutes until it was about 75% full. At that point, it was a cinch to use the included Vortex Pump Sack to fill up the remainder in three minutes or so.

This could be due to the Roamer’s self-inflating system, which uses two air intake valves, or might be due to the higher air to foam ratio in the Roamer. Either way, filling this Roamer Double took substantially less time than the Megamat, meaning you can have camp set up faster and with less effort.

Either of these pads should provide enough insulation for most campers in all but the most extreme circumstances. But, with an R-Value of 8.1 and a temperature rating of -40°F, the Megamat takes the cake.

You might wonder what the point of a camping mat rated to an R-Value of 8.1 is when you won’t be sleeping outside in anything less than 32 °F, but it’s worth noting that the R-Value is simply a measure of how well a sleeping pad resists heat flow. Since your body is constantly radiating heat, you want your sleeping system to retain as much of that as possible instead of simply transferring it to the cold ground. And the higher the R-value, the more efficiently your sleeping pad will retain the heat your body worked so hard to generate in the first place.

This also works in reverse when the ground is warmer in the summer. Instead of letting the heat from the ground surface penetrate through your sleeping pad, causing you to warm up at night, the pad creates an effective heat barrier as well. If you’re curious to know more about R-Values, check out our blog post on the subject, Understanding Sleeping Pad R-Values.

In short, the Megamat will help you more efficiently regulate heat, both in the winter and in the summer. 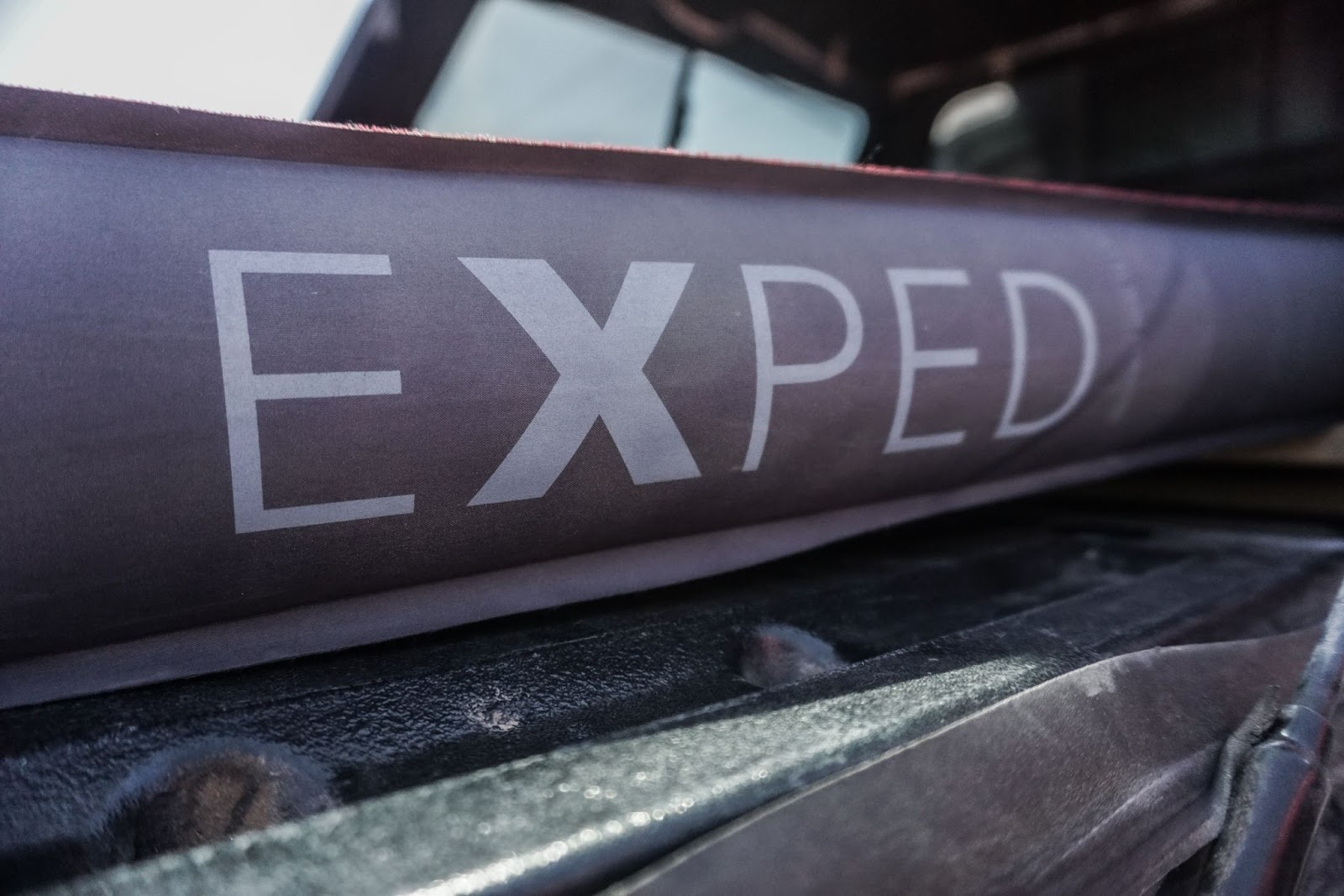 It’s perfectly legitimate to ask if weight really matters for a doublewide sleeping pad that’s meant for weekend warriors and glampers. And truth be told, that’s something each camper has to decide for themselves.

That said, anytime two comparable products have a weight difference of almost two pounds, it’s worth mentioning. With the Megamat weighing at 10 lbs 3 oz, it is 20% heavier than the Roamer, at 8 lbs 4 oz.

It might not seem like much now, but the lower carry weight does make for easier transport if you find yourself at a campsite that only has walk-in options available. 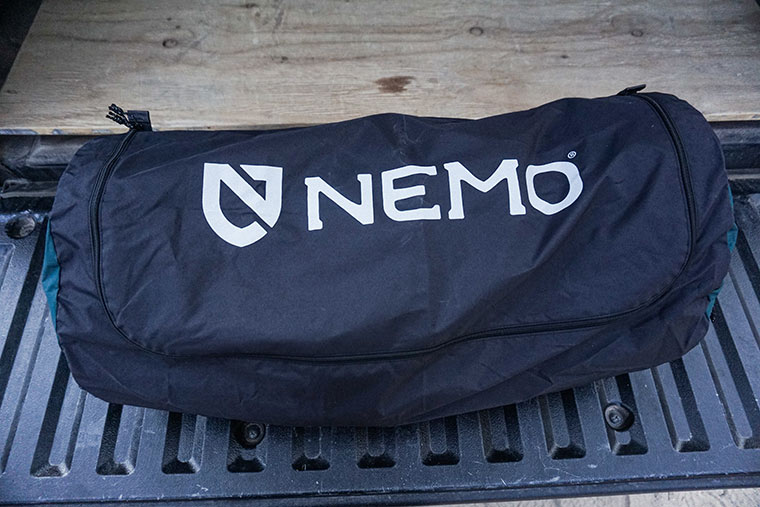 Owing to the slight differences in the construction, namely the amount of foam in each sleeping pad, they do have slightly different packed sizes despite having the same dimensions when inflated.

The difference is small, but once your car is filled to the brim and the whole family packs in, you’ll enjoy every extra inch of space you can get in the car. 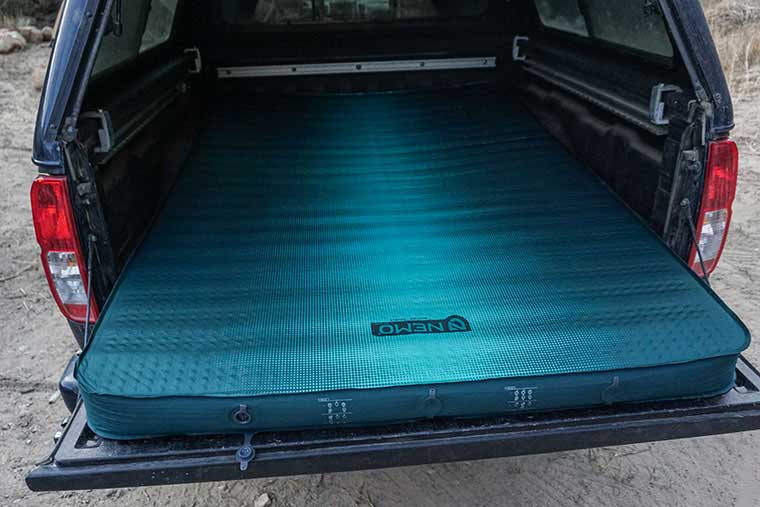 A 2-person sleeping pad is so much more than some air and foam between you and the ground. It’s the key to you and your partner getting a good night’s sleep, which is the cornerstone to any good camping trip. As such, it’s worth thinking about what’s at the top of your list for what would make the absolute best sleeping pad.

Most of the differences between these two pads come down to the fact that the Megamat has substantially more foam insulation inside. This makes it more comfortable to sleep on and warmer overall but also makes it bulkier, heavier, and slower to inflate.

The Roamer, by contrast, has less foam, giving it a startling quick inflation time for its size and making it easier to lug around. But it also comes with a higher price tag and is noticeably less plush cushioning.

Either of these sleeping pads will give you a comfortable platform that’ll have you catching Zs in no time. But consider your needs, and it should be obvious which one of these pads is right for you.

Campman is an outdoor retail store located in Salt Lake City, Utah that specializes in gear and equipment for camping, skiing, backpacking, climbing, and everything in between. We understand that the difference between a bad memory and the adventure of a lifetime can come down to the gear you take with you when you head outdoors, and we want our customers to have the best experiences possible. When it comes to getting outside, we get it, and we’ll get you the gear you need to get there.